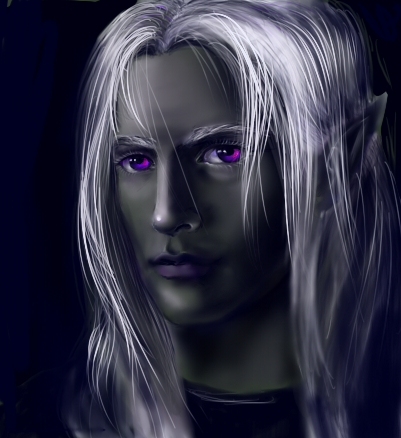 Class/Profession/Occupation: Hunter Assassin & Alchemist
Alignment (if applicable): Neutral Evil
Location/Residence: Citadel of the Undying (Can only be found at night)

Physical Description: Dark, Inky Black skin with long, bone-white hair that hangs down below his shoulders though he keeps it in a high cropped ponytail some of the time. He has bright, Icy Cobalt eyes that can seem cruel when he is angry. He is 5’10” Tall (Tall for his race), lithe in stature but with a tightly cut musculature. He has several tattoos in different parts of his body all depicting Dark Elven runes and script along with the depictions of spiders and other evil things he covets. He also has one of the famed moon runes upon his palm.

Equipment/Gear: He tends to only choose equipment of magical or exquisite make. A person in his line of work has not lived this long relying on inferior craftsmanship. He has a hand crossbow mounted to his left wrist when he intends to use it. Otherwise it is in a holster mounted at the back of his belt under his cloak.

He has a reversible hooded cloak, an ornate matte black silk and cloth on one side, a gray rough wool on the other. Inside the cloak is a pocket that holds a 3-part staff that can be assembled to resemble a walking stick or quarterstaff. The pocket also holds a long, gray beard that can be donned quickly to make the wearer seem common and elderly.

The Whip of Bodhi: A magical whip created for him by his sister on his 250th nameday. This whip is completely black and made from blackened leather and silk. Fully extended it is 10 feet long and can support around 500#. In the handle is a single, black soul crystal. This crystal has within it the soul of a Human Slave. Rhazian can command the whip mentally however these commands can only be basic: Become rigid, Snake move to a location within LOS, Snake grasp object in LOS, Snake squeeze object in LOS.

The Flute of Tholophonos: An artifact given to Tholophonos by Zusha of Dallos himself and passed down after his death. It is a flute made completely of obsidian but looks to be made of a polished gold in sunlight. If played during the day it is like any other flute if not sweeter and well made. If played at night it has a more ‘robust’ sound with an ability to lull those who hear it. If held by an assassin who has a ‘mark’ only the mark themselves will hear it and be affected by its music, if not by a greater degree. Inside the flute just off-center of the main sound chamber is a tube that has within it, a small blowgun. The player can load the blowgun as he plays with his mouth by opening the invisible hole and inserting the dart with his tongue. By blowing on the right hole the player can blow the dart at their victim without missing a note.

Personality: Rhazian is almost always laid back and bored and enjoys lounging on chairs and always seems at ease and relaxed. He dislikes being serious and indeed enjoys a good joke or quip or insult. He loves riddles, games and gambling as well as books, stories and ancient tales and artifacts. He is usually honest but will lie if it suits him. He does not much like feeling exposed and prefers to remain in the shadows and undetected. He is sly and intelligent. Unlike many of his kin, he does not take delight in the torture and suffering of others. He believes that living in this messed up world is torture enough. He does not condemn such practices though,

Religious & Spiritual Beliefs/General Worldview: He is an agent for Hades and prays to him, the Infernal Mother and to some of the more powerful Evil entities he has come to know.

Powers & Abilities (of any kind): He is immune to any and all poisons and most diseases. He is immune to charm and sleep like most elves and fairly resistant to illusion magics. For himself he is much like any other Dark Elf (Immortal, does not age) in their abilities but with his Nymph Heritage he can modify his face and appearance to a degree as well as use shadows and darkness to enhance his stealth abilities. As a skilled Alchemist, he knows much of poisons, chemicals, poisonous creatures and how to use them to make more complex concoctions in a laboratory. He also has learned how to make various golems to do his bidding when he has the components and the need to make them. He is an excellent hunter and tracker in both wild environments and urban. He is a skilled Thief and Fighter but he prefers to defend and escape vs. frontal assaults and defeating those who would come against him. As an assassin he has skill and experience employing many different kinds of weapons and specialized equipment.

Flaws/Fears/Other Weaknesses: He can be tempted to engage in games of chance or distracted by a riddle or tale if he does not yet know it. He appreciates beauty and at times can be distracted by that as well. He enjoys fine wines and rare spirits and will often over imbibe if he is not paying attention. His power and abilities are greatly reduced in the daylight and direct sunlight makes it difficult for him to see very well. He is susceptible to fire magic and may get dehydrated faster than some. His soul is linked (Due to his Nymph Heritage) to a large obsidian monolith deep in the CItadel of the Undying. He has had a stonemason make a large, ornate fountain atop it out of the indigenous stone found where it is. If it is taken, the one that is in possession of it would be able to give him commands that he can not refuse. If it is destroyed, he will die.

Family/Kin: He has managed to kill all of his brothers and his father died a slave long ago. He has had an Incestuous relationship with his mother and sister since he hit puberty though that has long since become very infrequent.

Friends/Allies: He has few friends and confidants save for his mother and sister but he is a creature of note and respect in the Citadel and is often asked to preside over some disagreement or personal affrontery that requires a duel to the death/Evil creatures and cults.

He may have up to 6 standard Gargoyles that stand just over 2 meters tall that accompany him for missions or as bodyguards. They have eyes made of garnets and blocky bodies made up of a hard, gray stone that can repair themselves if there is an abundance of stone or earth nearby but the process is not immediate. They have long claws made of black granite. They can be utterly destroyed if their eyes are removed from their bodies or their heads as a whole.

Familiars/Animal Companions/Pets: He has a small Gargoyle named Yama who stands about 1.5 meters tall, an experiment that went wrong. Not only did she come out much smaller than the typical soldier Gargoyles he often employs, she has a certain amount of self awareness and personality and is absolutely enamored with Rhazian. She would have her way with him if he would allow such a thing and has been known to become jealous at times. She has a sense of humor and is not above playing practical jokes and tricks on would be victims. She is completely loyal though naive and has the ability to transmute stone into her to heal herself when she becomes injured. She can fly for indefinite periods of time and can just manage to carry him though it takes alot of effort. She has eyes made of magical rubies and large, long claws made of obsidian. Her body of stone is smoother and more feminine than her more blocky and unrefined brothers in arms. All gargoyles have the standard abilities and weaknesses they would normally have unless otherwise stated above.

Enemies: Gods, cults and creatures of good and light.

Background: He never knew his real mother and as a child, Rhazian was tossed in pits with slaves, beasts or one of his adopted brothers to fight for his life for the entertainment of his adopted aunts and his own adopted mother. If he survived he was pampered, taught history, literature and how to be a Dark Elf though he was a half-breed. In Dark Elf society, the women lead and the men follow. His mother is one of the most powerful Wizards and Scholars he has ever come to know. His sister is a Necromancer and has extensive knowledge of the races of the Undying and the art of dark magic. Rhazien’s aptitudes however did not lie in the magical arts. His skill sets were of a more...physical nature.

When he had reached puberty, both his older sister and his mother used him as a sex slave and taught him much about how to please women. He cleaned, ran errands and tended their every need. During this service he met an Alchemist that supplied his family with acids, potions and other things that they desired. It wasn’t long before he and the Alchemist had a rapport with one another and he decided to teach Rhazian how to conduct himself in a laboratory and about what alchemy was all about. Rhazian learned fast and at the age of 17 he was caught in an attempt to assassinate his own mother. She was so pleased at his brazen initiative she granted him citizenship and he was no longer a slave.

As a male citizen Rhazian was allowed to select an apprenticeship. He initially wanted to be taught Alchemy however his mother thought different and she turned him over to the Assassin Masters. He had no real choice and if you failed to learn at the Academy, you died. Thus, Rhazian became one of the most dangerous Assassin Hunters in the Citadel. When he became a Master himself he was allowed to take back up alchemy and with the help of his sister’s experiments together they began learning how to create golems and re-animate the undead. Years turned into decades and decades turned into centuries where he honed his skills and learned everything there was to know about poisons, alchemy and the art of golem-making. His efforts and zeal did not go unnoticed.

The priestesses of his mother’s order invited him to attend them while they communed with the Infernal Mother, the mother of all Dark Elves. During the ritual the Infernal Mother reached out and touched Rhazian, an extremely rare an honored occurrence. From then on he was allowed to pray with the priestess’s and eventually he was taught how to play and commune with Hades as well. Hades never made his presence known as the Infernal Mother did but one night he awoke with an Obsidian Flute that had been set into his hands. Not just any flute, a magical one that once belonged to a famous Assassin named Tholophonos.

Rhazian’s notoriety grew and he was bestowed with one of the Moon Runes that opens up the passage that leads to the Citadel of the Undying. At night, for a fee he plies his trade to deadly efficiency.