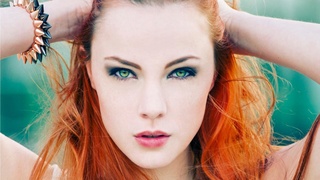 Appearance: Rowena is striking with her long, slightly curly red hair and intense green eyes. Since her transformation her eyes have taken on a slight glow to them that draws in her prey. Her skin is ivory in color and will become even paler and almost transparent if she hasn’t eaten in sometime. Just after feeding her cheeks and lips will flush with color and become extremely rosy in color. She stands at just about 5'6" with a slightly curvaceous figure.

Personality: Rowena is very dark and mysterious. She is troubled, and yet one cannot help but be drawn to her. While she knows that there are other vampires out in the world, she tends to remain solitary and always hunts alone. She had been deeply religious in her mortal life, but after her transformation she first believed God had abandoned her, but then over time she lost her faith completely and no longer believed He even existed. Rowena has spent the entirety of her life after her transformation trying to comprehend what she has become. She hates killing people and feels guilt, but at the same time she enjoys the feeling it gives her. She can be quiet and quick in her killings or draw them out for hours depending on her mood at the time. She exclusively hunts men, particularly men who she can sense are not good men, telling herself that she is doing the world a favor by ridding it of them.

Abilities: Rowena has super human strength and speed. She has the ability to see in complete darkness and can hear things that mortals cannot (including the sounds of beating hearts from up to a mile away). She can smell a single drop of blood from several miles away. She can jump incredible heights and learn languages within minutes. By drinking someone's blood she can not only read their thoughts, but also see their past. Rowena also has the power to transform into a cat.

Background: Rowena was born on May 14th, 1647 in Huntly Castle in Aberdeenshire, Scotland to Alastair MacLathagain, 4th Earl of Huntly and Countess Glenna. She was their third child and first daughter, having been born after her brothers Graeme and Euan. Rowena was raised in a deeply religious Protestant home and was extremely devout. At a young age her eldest brother, Graeme, began sexually abusing her. As she grew older, he began to threaten to kill her if she told anyone. And so for years she endured his abuse behind the closed doors of her bedroom. Fearing that this was somehow her fault, she prayed to God to show her what she needed to do, but received no sign from Him.

As Rowena matured her feelings about men began to change. At the age of 17 she discoverd she is pregnant by Graeme and when she tells him he forced her to drink a diluted poison that killed the unborn child and in the process nearly killed her as well. Even after that Graeme continued to sexually and verbally abuse her. When she turned 23 she is promised to Jamie McBain, a young Lord from a powerful clan and their wedding is planned for the summer. However, one early, rainy spring night the house was visited by a mysterious stranger, who only introduced himself as Armand, seeking shelter from the weather. He seemed particularly drawn to Graeme. For the next two weeks Armand remained in Huntly Castle. He was well mannered, highly educated, soft spoken, and extremely handsome. Rowena was drawn to him, but something about him also frightened her. He was never seen during the day, only at night and only seemed interested in Graeme.

One night, Graeme came to Rowena's bedroom and began to sexually abuse her. However, as he was raping her he bit down on her neck. Before she could scream he shoved a hand over her mouth to stifle the sound. She could hear him sucking...feel the life draining from her body. Every second felt like an hour. Suddenly, he stopped and pulled back...his face dripping with her blood. While still raping her he bit down on his wrist and forced her to drink his blood. In an instant, something changed within her. She wanted the blood...craved it. She could hear it rushing...hear his heart beating. She was hungry...so hungry. She could feel a strength grow within her. As her brother started to get up off of her she grabbed the candle from the side table and flung it at him. He screamed as the flames envelope him. Suddenly, the entire room was on fire. However, before she perished as well Armand appeared and in a second he jumped through a window with her and took her into the night.

For the next year Rowena stayed with Armand...learning from him whatever he would tell her. She hated what she had been turned into and begged Armand to kill her, but he would not. One night he told her if she wanted to die that she would have to kill herself by walking out into the sunlight (young vampires will be killed instantly by sunlight. As they grow older and more powerful they have the ability to tolerate sunlight to a degree, but still cannot remain out in it for more than a few hours). However, as the sun came up, Rowena found that she could not go through with it. The following night she left Armand to be on her own.

Rowena has traveled the world many times and has read enough books for a thousand lifetimes. She has learned to play many different instruments and has watched as generation after generation is born, grows old and dies. She has never returned to Aberdeenshire and Huntly Castle, which still stands. It was believed that she had perished in the fire, although a body was never recovered, and a headstone bearing her name lies in the family graveyard...next to that of her brother Graeme.