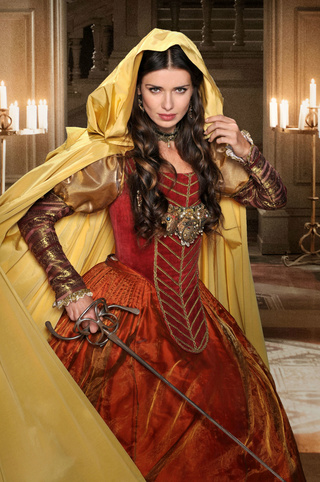 Born: 1610 in the Foreign Quarter to the popular prostitute Violet Dubois-Father unknown

Weapons: Lorelei owns several daggers, which she keeps concealed on her body at all times, but is also skilled with muskets and swords and is knowledgeable with poisons. She is also highly skilled in hand to hand combat, much to the surprise of many of the men she has encountered.

Appearance: With her long, dark, wavy locks, and bright green eyes, Lorelei is strikingly beautiful. She has naturally red lips and rosy cheeks, which are highlighted by her ivory colored skin. She bears several scars, but hides them beneath her clothing. Lorelei takes pride in her appearance and enjoys fine things, whether she buys them herself with money she's stolen, or simply steals the items themselves.

Personality: Lorelei is the perfect combination of beauty and danger. She learned to fend for herself from a very young age and does whatever she has to in order to stay alive. She is cunning, ruthless, and extremely deadly. She shows no obvious remorse for the wicked deeds she has committed. She can easily gain someone's trust, and then use that trust against them.

Background: Lorelei was born on the floor of a dirty backroom in the Foreign Quarter to the popular prostitute Violet Dubois. Lorelei was unloved by her mother and was barely kept alive by her. Lorelei's earliest memory is of watching her mother service a young noble in a back alley while on her knees. She told herself then that she would never become a prostitute like her mother. At the age of six she was thrown out and left to fend for herself. To keep from dying on the streets she learned very quickly how to take care of herself. She learned to steal and lie and use charm to get what she wanted.

At the age of 12 she was raped by a man when she refused to prostitute herself for him. She fought against him the entire time and he nearly strangled her to death. Afterwards he threw several coins at her, which caused her to snap. She jumped up and grabbed his dagger and stabbed him in the chest. She robbed him and took his dagger and fled before the body was found. Three years later she came across the home of the wealthy noble Severin Royer. Thinking highly of her skills as a thief she managed to break into his house in the middle of the night undetected and proceeded to fill a bag with anything silver she could get her hands on. However, she didn't realize that Severin had awoken and as she tried to flee his guards shot her in the back with a crossbow. Her heart was just barely missed and she was taken to a hospital. As she was recovering Severin came to visit her and told her that he had arranged for her release and lied to her by telling her he had paid three times what he actually had. In exchange for his kind deed she was his. From that day forward she became his agent, performing duties ranging from spying to assassination. Her incredible beauty put her in the bed of many important men, whom she would gather information from and give to her master. As a reward for her good work, and her company on occasion in his bed, she has been given her own rooms in his home, fine wine and food, jewelry and clothing, and one of the best horses in France.