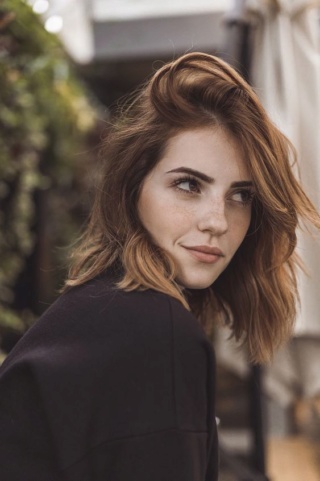 Background:
Isabella and Tony Stark met while both working for the Avengers. They fell in love and married and decided to leave the team after Isabella became pregnant. They didn’t want that kind of life for their daughter and they wanted their daughter to have both of her parents. During her pregnancy with Serena, Isabella was accidently exposed to radiation in her husband’s lab. She survived, but went into labor early. Both Isabella and Serena survived, but they weren’t sure what the long term effects of the radiation exposure might be for Serena.

When Serena was 3 years old New York City was attacked by aliens and her parents made the decision that they needed to go and fight. It would be a decision Tony Stark would regret for the rest of his life. Isabella was mortally wounded during the fight by an alien weapon and died in Tony’s arms. Tony grieved his wife’s death and vowed to keep his daughter safe and alive. Serena was raised by her father and spent her early life traveling with him around the world. She was homeschooled early on with Tony bringing in the best teachers he could find. Serena showed early signs of great intelligence and began to excel at math and science.

Serena finally convinced her father to allow her to attend a real school when she was 13 and she was enrolled in a special magnet school that focused on STEM subjects. It was there that she met Peter Parker on her first day. The two immediately became friends and Peter showed her the ins and outs of attending a real school. She was never allowed to take public transportation and instead Happy Hogan chauffeured her.

Tony would never talk about Serena’s mother and Serena grew increasingly curious about her. Finally, one day she confronted her father about her and they got into a terrible argument. It was during that argument that the effects of the radiation exposure her mother had received while pregnant with Serena activated the mutant gene in Serena. She very nearly killed her father with a blast of energy that suddenly shot out of her hand. He only just managed to get out of the way in time. Tony got in contact with Charles Xavier and had Xavier come and examine Serena. During that time it was discovered that Serena not only had the ability to create blasts of pure energy, but also energy orbs, and energy shields. However, using those powers would drain her own energy. It was furthermore discovered that Serena could absorb pure energy. Charles offered to take Serena back to his school to teach her there, but Serena didn’t want to go. Instead, Tony worked with her himself and Serena continued to attend her school. Every so often Charles would come and visit with Serena to ensure she was progressing with her understanding of her powers and her control of them.

Serena graduated at the top of her class and is currently pursing a degree at MIT. She wants to join the Avengers and fight, but her father won't allow it.