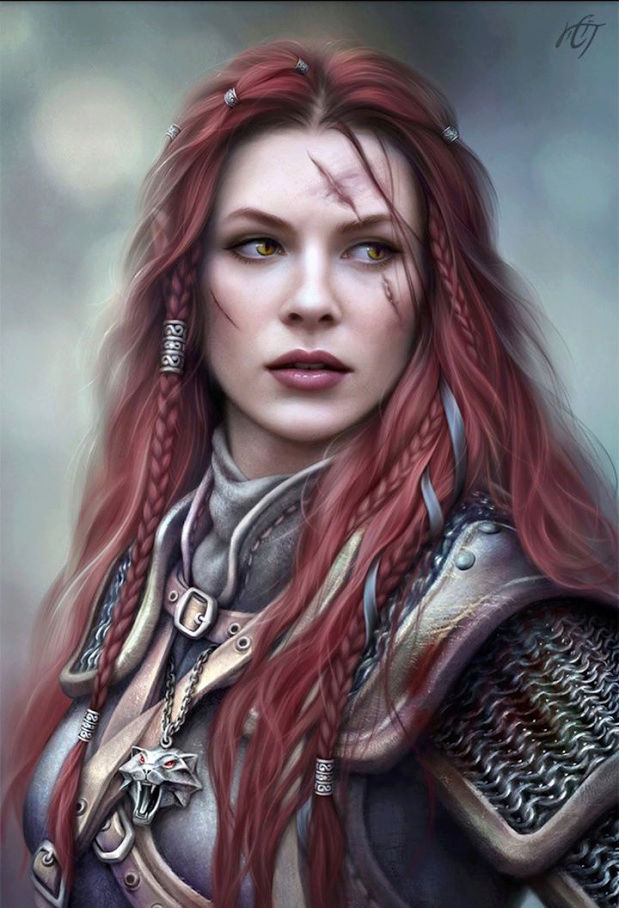 Weaponry Skills:Verya was once a part of the border guard of Alysian until the death of her father made her Queen of Alysian. She is deadly accurate with a bow, but also carries two long daggers. Like all wood elves, she is very comfortable up in the trees and can move silently through the tree tops before dropping down seemingly out of nowhere before an enemy.

Personality: Verya is strong headed and stubborn. She is quite young for an elf, particularly one who is a Queen. She knows that because of this the High Elves will continue to challenge her authority. She is fiercely protective of her people and will do whatever it takes to keep them safe. She prefers being outdoors among the trees and will often go off on her own. Several suitors have come forward seeking her hand, but she has turned them all away. With the death of her father she now feels alone, although she never shows her loneliness in front of others.

Appearance: Verya inherited her mother’s fiery red hair. It is long and she often wears it braided, particularly in battle. Her skin is ivory in color, but there is a natural rosiness to her cheeks and lips. Her eyes are what give away her royal blood lines. They are a soft golden color, the color of all eyes of the direct Laurelen bloodline and the reason behind the name Goldenstar. As Verya spends most of her time in the trees she wears a green tunic and doeskin leggings that fit her snuggly. Her boots are made of a soft, well-worn leather and come up to her thighs. She wears two brown leather arm braces and a brown belt worn low upon her hips. Her cloak is forest green and unadorned and has the ability to blend in seamlessly with her surroundings thus causing her to become invisible. Her quiver is beautifully crafted with a golden tree and star embossed into the leather. When inside the palace, which is built among the trunks of several large trees, she wears long, flowing dresses and her golden tiara.